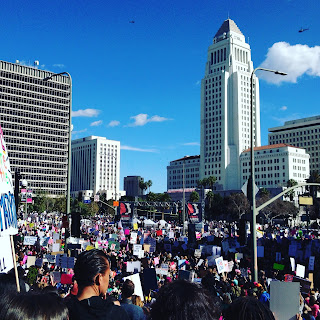 
Rain cleared away the city’s grime, leaving sparkling pavement and clear blue skies. The crisp air buzzed with excitement. At the metro station, lines stretched around the block with women and men, girls and boys, toddlers and infants, elderly and handicapped. We were all heading east towards the heart of the city, to the gathering of promise, to the march for women.

I was nervous. I had never participated in a rally before, let alone an international march. The news and friends on social media warned of the dangers of participation: confusion, violence, injury, arrest…  But none of these fears could hold back the pure energy—the will—to fight against a deeper and darker fear of uninhibited power wielding its mighty sword of hatred and ignorance.

We mounted the platform, waiting for the train, and soon it grew even clearer that not only were people lining up at our station but at stations along the entire route. People packed inside each train like candies inside a piñata, waiting to burst at the right moment. The march had already started.

Better to board the first open train, even if it is going the opposite direction. We rode to the end of the line and back again. People at the train stops stared, gaping in wonder at the sheer volume of individuals packed inside the silver tube. Crowds cheered and chanted:

Energy spilled out into the streets at each stop. More people pushed onto the train when space permitted. Growing hot and anxious, we exited two stops early.

At the heart of the city it was strangely quiet. Hardly a soul on the streets and no more sound than the usual traffic. Nerves on edge, senses tingling, we walked four blocks and to the right. Suddenly, we saw them: signs and banners, pink hats and costumes, women and men marching together toward city hall. The crowd grew thicker, drawing itself around us as we joined the masses.

Without a sign, we walked, tense and alert. We listen as pockets of cheers and chanting carry through the people like a wave, pushing us on to our destination. We clapped and shouted, carrying the message forward. We will not be silent. We will not lay down our liberties. We will resist. We will fight.

Low men fly high in the air, waving a banner announcing their support of our enemy. Coward. Face the ones you so wish to silence! Face us whom you wish to oppress, to smite with your arrogance and greed! They fly away and the phoenix rises high before us, guiding us to the center, the beating heart of the city, to the ocean of love and unity which brought us here.

At last, we pass the glittering windows of a great building and hear the siren call of our kindred. We stop and drink in the hopeful energy surrounding the stage at the front of city hall. A beacon in the sea of doubt overshadowing the nation—the world. Women of courage and strength mount the platform and call for us to battle, to be strong, and to spread the word of love and unity which is the only way to defeat violence, to banish hatred, to overcome evil. Like rays of the sun, their words warm our hearts and uplift our spirits. Our fears have been vanquished.

We will prevail.
Posted by Jess Chrysler at 3:54 PM

Jess Chrysler
Fantasy artist and storyteller, a plotting pants-er, and lover of the written word.